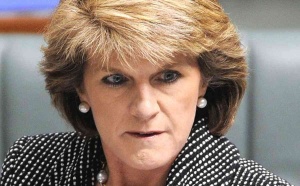 The foreign minister said she had met the US secretary of the interior, Sally Jewell, in Sydney before the G20 and outlined “in considerable detail Australia’s commitment and capacity to preserve the Great Barrier Reef”.

“And I pointed out that we were working with the heritage committee and with UNESCO to ensure that the barrier reef remains as healthy and protected as is humanly possible,” Bishop told the ABC.

“I pointed out that mining and drilling and gas exploration are banned by law from the Great Barrier Reef region and that we had acted to prevent the dumping of capital dredge waste in the marine park. Indeed, [environment] Minister Greg Hunt announced that during the World Parks Congress, that we will ban that by law.”

Julie Bishop, Australia’s Minister for Foreign Affairs, has lashed out at US President Barrack Obama, reproaching his churlish ignorance, insubordination and bad form. His offence? He voiced fair and reasonable public concern for the survival of Australia’s Great Barrier Reef. Weak on fact, strong on indignation, Bishop’s objection contributes more dark comedy than any light of reason. Indeed, the more she protests, the more she resembles a Catherine Tate character: ‘How dare he, how very dare he!’

Bishop’s self-parodying protest speaks volumes about herself and her government. Diving into desperate damage control as her government’s domestic standing declines and her own standing takes a hit, her intervention is only likely to make matters worse for both.

Bishop’s nose is out of joint. How dare Obama speak out? Show us up? How dare the US President ambush the Australian Prime Minister, Tony Abbott on his home turf? Then there’s the lapse of decorum: it is such poor form for a mere guest to abuse his host. Poor form, also it would seem to ignore the Australian Foreign Minister’s briefing, even if it did contradict all of the science. He did not know what he was talking about. The US President “overlooked” Australian actions in preserving the reef, she claims, as if correcting a small boy’s homework.

A spirited self-defence is evidently hard at work, at least. The Minister for Foreign Affairs cannot be faulted, at least in her own version of events. Yes and No Minister. Self-justification after the fact serves only to reveal a significant chink in your Armani. The test of performance lies in what is or what is not achieved, not who or what you might claim afterwards is really to blame. Your job is to make it work, not to point the finger when you fail.

Bishop’s over-retaliation has raised eyebrows whilst lowering her own and her country’s international standing. First, it is stretching things to accept that the President acted wrongly or badly. What else was he expected to do? Abbott, as G20 chairperson insulted world leaders as he attempted to limit the agenda, substitute his own agenda and hijack international events for domestic gain, a manipulation which conveyed at best indifference and at worst contempt for the real challenges faced by the world and its leaders. Any leader worth his salt would take a stand. Any true world leader would want to turn attention back to where it belonged.

In Brisbane, Abbott proposed, in effect, a G20 public housekeeping party; a global gathering where he would speak openly of struggling to put his own house in order whilst attempting to sweep climate change under the carpet. It was easy to appear out of order in this parochial context. Even compulsory. Virtuous. All you had to do was show a true commitment to international affairs.  Or behave like a statesman.

Obama’s timely reminder that the reef was in danger of extinction because of climate change contributed, it is true, to his upstaging the G20. Yet it was upstaging by default, simply because he cared enough to speak out on the major issue confronting the world. For this he is to be commended rather than condemned. And there are already clear signs that his words helped refocus the attention of the leaders present. He is to be admired for heeding the call of duty.

Julie Bishop, however, has a more limited perspective. How dare Obama have the temerity to exercise genuine world leadership! Shame Australia’s leaders out of their self-absorption and parochial self-interest. She wants to cut Obama down to size. Her agitation is palpable. What would he know? Whom did he talk to? Who does he think he is? Like Shakespeare’s Lady Macbeth the lady doth protest too much. It will be her undoing. She is already hoist with her own petard.

Not only was Obama out of order, Bishop alleges he did not know what he was talking about. Worse, he bypassed her.

It is true Obama did not consult Bishop before he made his speech drawing world attention to the dangers faced by this part of our world heritage. Nor should he have. No-one else, it seems, could do it. Least of all his host. This part of her reasoning is also comically self-important.

She tried to tell him. But would he listen? Bishop complains she briefed US Interior Secretary Sally Jewell prior to the address, just to see Obama got his facts right. This, it seems, would have ensured that he left the reef bit out. No doubt she has explained this to her own boss who might have also raised the odd question over Julie’s less than stellar G20 contribution.

Bishop has been forced to quickly sent Obama a bromide in the form of a briefing paper pointing out the error of his ways, reefing him in for his untrammelled arrogance and stupidity. Talk to me first, next time, meathead!

Proving once again that there is less to Bishop than meets the eye, her rebuke is typically insubstantial. In fact it is pretty fact free, embarrassingly flawed. Like many of her government’s recent attempts to explain situations, it bothers little with science or logic. But it makes revealing reading. Compelling, too, not only if your taste runs to a farrago of lies, disingenuous assertion and misplaced indignation at being upstaged by someone with a real concern for the future of the world and the means to make a difference.

Bishop’s case is countered by leading scientists who point to rising temperatures and increasing carbon dioxide in the oceans. Massive bleaching and destruction of fragile ecosystems will result.     Mr Obama was “right on the money”, Ove Hoegh-Guldberg, director of the University of Queensland’s Global Change Institute, said. “He was stating a fact.

“We have one of the jewels of the planet in our possession and we should care a lot about climate and he wasn’t getting that from our leader [Prime Minister Tony Abbott],” Dr Hoegh-Guldberg said.

Seldom stooping to let facts get in the way of her argument, Bishop’s petulant remonstration sets out clearly once again for all the world the wilful ignorance of her own party, the limitless arrogance of her own personal position and the status of both as terminally endangered species.

The current Minister of Foreign Affairs, who is also deputy leader of the Liberal Party, and the only woman permitted in the Abbott government Cabinet, has greatly disappointed with her failure to acknowledge the best efforts of those who are committed to dealing with climate change as a world priority. Her recent efforts have hindered more than helped anybody.

Her performance is all the more deplorable for its wilful distraction; amounting to an almost criminal neglect of other pressing international issues such as the unequal status of women, violence against women and any practical plan towards redressing the world-wide trend away from inclusivity and towards further marginalisation and discrimination.

Starting to clean up our own backyard would be perhaps too parochial for our globe-trotting Foreign Minister but it is a sound first step for implementing wider reform.  Immigration is a bridge too far, no doubt, but the latest bill before the senate will make us the pariah of the international community. Alternatively, she could try closer to home. A ‘robust discussion’ with Colin Barnett, her home state premier, about his decision to close around 150 Aboriginal communities would be a useful place to start.

Of course, this would involve rethinking her own approval of the scheme. It’s another Federal cutback which the nation never got to vote on last election. WA has chosen to make Aboriginal people refugees in their own country because the Abbott government decided to cease funding for essential services in remote communities. As part of the cabinet discussion around that decision, she could explain how this is leadership rather than something we should all be deeply ashamed of.

Julie Bishop, you had the chutzpah to rebuke Barack Obama over the Barrier Reef when he was clearly in the right. Surely, then you have the wherewithal to stand up to your Prime Minister when he is clearly in the wrong. Begin to assert your independence where it may do some good. Tackle Abbott over all those areas of policy in which Australia is reneging on its responsibility to its own people to say nothing of its international obligations. Tell him he is wrong about climate change and that you need to conserve your energies to fight injustice, inequality and ignorance at home before you can take another single step on the world stage without making yourself and your government an even greater international laughing stock.