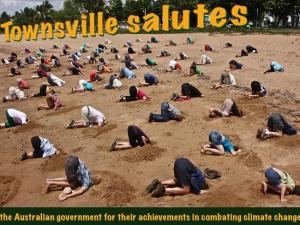 Australia’s Prime Minister for the time being, the feckless and friendless, ‘Toxic’ Tony Abbott who almost single-handedly has achieved the rare distinction of making himself both universally loathed and totally dispensable with astonishing and record-breaking rapidity, is in for a nervous twenty-four hours as voters in Queensland vent their anger by punishing Campbell Newman for being Campbell Newman; threatening to sell off state assets and for having something to do with the detested Federal LNP government and its hateful PM.

If Newman loses, or if the spin doctors are stumped by the size of his government’s losses, it will be curtains for maverick monarchist and general-purpose sycophant Abbott, as much as it will be Queensland’s own one-fingered salute at austerity politics with its formulaic sacking of public servants and its fervid urge to privatise ports, power plants, power lines and other ancillary public utilities, a move its hard right ideologues claim will reduce the state deficit. Normal, ordinary Queenslanders are not so struck on the plan because it will guarantee steep rises in the cost of luxury items such as household electricity. Not to mention a drop in the quality of regional power services in the far-flung state.

Damaged-brand Newman, of course, is tipped by pollsters to lose his own seat because his electorate still has voters who work for a living; voters for whom the prospect of higher utility bills is a real turn-off rather than a smart move that will boost the state’s financial bottom line whilst lining the pockets of Campbell’s pals in commerce and construction. The loss will rival Abbott’s rout-seeking self-destruction given that only three years ago his party swept to power winning 67 out of 89 seats. Newman has also made history for the number of public kisses he can bestow at any one gathering and for carrying his sports jacket on his finger to all public appearances.

Boffins are baffled by the sudden outbreak of osculation in the Queensland premier’s repertoire of stunts but, with a nod and perhaps a pucker up to Newman’s military background have dubbed such gatherings the Kiss Army. Local pharmacists are said to have stockpiled anti-viral ointment to cope with any contingent eruptions of herpes simplex amongst party faithful, although these professionals prefer the term The Smackeroos when describing Newman’s fan club. A puckering of smackeroos is said to enter the vernacular as a collective description of any meet’ n greeting of LNP party members.

Similarly, Newman’s coat-carrying is held to be an inspiring demonstration of flexibility: that the Premier has other uses for his versatile forefinger beyond pointing into the middle distance whenever a photo-opportunity presents itself.  Or perhaps he deludes himself it makes him look taller. But that’s not all. ‘Fingers’ Newman has certainly been giving his middle digit a workout in dealing with the mob in Canberra.

The banana bender’s otherwise mind-numbingly dull election campaign has been fascinating for the message sent to the PM from the Premier of the Deep North, whose state motto must now be beautiful one day, rejected the next. Keep out or we call the bikies in. Show your face and we break it. Invoking their own unique form of border protectionism and in a one fingered salute to federalism, the Queensland government, an oxymoron heading for annihilation at the hands of outraged punters, has hoped to contain some of the damage by refusing to have a bar of Abbott or any of his mob. In this they have showed a rare common-sense but it is likely to prove too little too late. The electorate is not stupid nor does it forget that Abbott was all over his best-buddy Newman like a rash not so long ago. Besides, the damage has been done or, perhaps over-done: and the last thing Newman needs is an extra hand at the barbie to cook his own goose.

Border protectionism has only barely acted to contain the southern menace, however and today a mouth from the south has opened today spruiking the Liberal brand as the only party to make you rich. Joe Hockey, Australia’s worst treasurer, who can’t handle rejection of any kind typically pointed up the Liberals’ affiliation with materialism, greed and self-interest lest it be said after the rout, that he hadn’t done anything. His embarrassing barracking for the rich and the wannabe rich from the sidelines is unlikely to do either politician any good although Hockey is so unpopular that any further decline in his ratings is meaningless.

Apart from Joe’s blowing his bags, other harm was inflicted on Newman from the southern end of the Liberal grandstand. Opposition leader Annastacia Palaszczuk whose evocative name which evokes ballet rather than any rougher body-contact sport, will appear on spelling tests in all Queensland schools henceforth, has appeared naked in caricature astride a wrecking ball on a federal politician’s Facebook page. Apologies to Miley Cyrus is written in the corner.

The image has “nothing to do with me” according to Campbell Newman in a disclaimer which evokes Christopher Pyne’s denial that he had promised Ashby a job if he helped the Libs in opposition sink the slipper into power-balance holder and former Speaker Peter Slipper. The Facebook contribution was made by Dawson Coalition MP George Christensen, whose special talent lies in the new economy growth area of creating social media outrage, made his own helpful contribution to the Queensland election campaign on Tuesday, but inexplicably the cartoon was quickly taken down.

‘All my own work’ Christensen posted a cartoon of Ms Palaszczuk naked on a wrecking ball, crashing into a wall representing jobs at the controversial Abbot Point Coal Terminal, with Greens leader Christine Milne cheering in the background. Anxious Queenslanders and spelling bee buffs are at pains to point out the one t in the name of the coal terminal.

As for Ms Palaszczuk, herself, she appears to be a thoroughly decent person with a concern for others who has showed no tendency whatsoever to suck up to Rupert Murdoch nor flirt with anyone and everything with money in its pockets in a refreshing contrast to the current incumbent and in marked contrast to the nation’s PM whose obsequious fawning and sheer determination to play the royal toad had him dub Queen Elizabeth’s consort, Abbott’s soul-mate and kindred spirit, the unreconstructed autocrat, the Duke of Edinburgh, ‘Philip- who brought him?’, the man with a gaffe for all occasions with an Australian knighthood.

‘I say to the people of Queensland don’t abandon good government tomorrow’ was the abandoned Tony Abbott’s Captain’s call today in yet another puzzling phrase, a lexicographer’s study in gratuitous fatuity, a conundrum which is nevertheless likely to enter the national lexicon for its unintentional irony, ambivalence and its capacity to make history under the heading fatal last words.