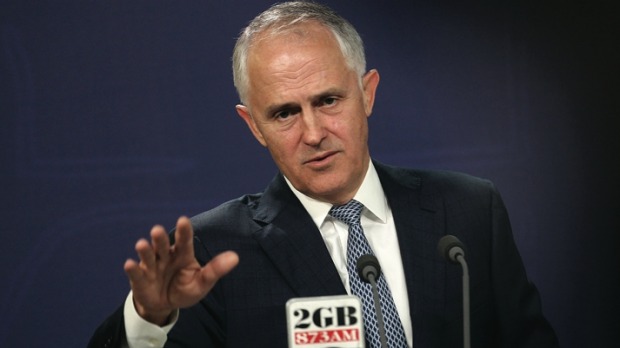 Another week, another Prime Minister struts and frets the poop deck of Federal Politics as the Liberals throw mad Captain Abbott overboard and bring back Malcolm Turnstile from the brig in a desperate attempt to calm rising seas, distract circling sharks and other monsters of the deep and to keep their leaky vessel off the rocks.

Captain Ayatollah as he is known to former crews, appears delighted to be at the centre of the political universe and in his rightful appointed place at last. He can’t get seem to get that thin grin off his face. Malcolm Bligh Turnbull flashes his barracuda bottom teeth as he contemplates his new cabinet demotions and the settling of old scores. Ever gracious in victory, he congratulates Fortune on finally coming to her senses, even if it did take five long years for her to get it right.

Nothing becomes Tony Abbott, so much in his Prime Ministership as the leaving of it. Not that he makes a good end. Like all bad hams, he drags it out too long. Not until mid-day Tuesday, does he share with the nation his parting pearls on losing Monday’s leadership spill against him by a margin of ten votes. Where is he hiding? Has his stint in the Top End convinced him to copy Adam Giles and refuse to step down? Like a shark can he only swim forward?

A SkyNews helicopter quarries him out at lunchtime Tuesday outside Parliament House, a hunched figure walking awkwardly as he were a farmer with a pig under each arm. It circles above, upstaging the former PM who rants and rattles the mental leg-irons of his slogans, clichés and lies, in subdued but nevertheless classic Abbott fashion.

Beelzebub, God of lies, Lord of the Flies why hast thou forsaken me? Am I to be destroyed by my own hubris?

He lies that he sees it as an honour to be asked to go. The rest of his farewell is shredded by the noisy blades of the hovering media chopper. Right to the end he has trouble getting his message out. Or does he? Luckily half his audience is deafened or they might be upset; take issue with his attack on them. Unbelievably, he promises to stop his sniping, hoping doubtless for some kind of truce.

Abbott whimpers. Snipes. Curse Turnbull, this isn’t the twenty-one flag ‘Presser’ of the week he had planned; his glorious war on Syria’s ‘first bombs away’ of his recovery is planned for Wednesday. Abbott blames everyone and everything but himself for his fate, a true anti-hero to the bitter end. The ‘Meeja’ cop a broadside. But a bad end cannot detract from his accomplishment. Going. It is the most seemly and fitting thing he could ever do as PM. Or have others do to him.

Colleagues choke back tears of grief and pity. Oh, that it took so long to get rid of him. Tributes flow from the lips of those who lopped him; cursed him when he held power. Morrison’s Father Confessor, His eminence raving Ray Hadley, Alan Jones and Andrew Bolt go ballistic. They have lost the best ratings milch-cow in the history of shock-jock demagoguery.  They know they won’t be telling Malcolm what to think. Besides his head is too big.

The consensus among these opinionated egotists of the shock-jockracy is that Turnbull thinks too much of himself. Australia be warned. He who falls in love with himself shall have no rivals. Turnbull take note.

A staffer working overtime shredding documents in Abbott’s office Monday night, however, shows remarkable understatement and restraint. He calls out to Turnbull, who is taking a nocturnal stroll around his palace, noting who’s still at work, congratulating himself on taking possession.

‘Yes, what is it, my loyal and dutiful subject?’

Consumed by recrimination and regret, Abbott cannot bring himself to attend his rival’s swearing in, the formal handing over of his wonderland of power. Flushed out of hiding, all he can do is play the victim. He flails about him; lashes out.

‘We have more polls and more commentary than ever before — mostly sour, bitter, character assassination. Poll-driven panic has produced a revolving-door prime ministership, which can’t be good for our country, and a febrile media culture has developed that rewards treachery.’

For all his macho swagger; for all his fearless shirt-fronting, onion-eating, public courage Tony Abbott wimps out. In the end he cannot face even his own knight, Sir Peter Cosgrove.

Abbott, the avowed monarchist, resigns by fax in one last gaffe. He breaches protocol, committing Lèse majesté against the Australian Governor General representative of her majesty the queen.

The deposed PM is absent without leave from parliament all week. An ABC camera lingers on a vacant back bench seat now allocated to him, unwarmed by his nether regions all week, the unfilled place, a metaphor for his time at the top. A hot-shot opposition leader, the job of Prime Minister proved just too big for the man. Not that it stopped him having a go.

Abbott was always prepared to punch above his weight. Foolishly at times. Yet it was his pugnacity, his conviction that he could beat Bill Shorten and that beating Shorten and hammering Labor was all that being PM entailed, more than any other flaw which made Abbott the architect of his own downfall.

Scribes are quick to list his many other failings. His war against the Left, caused him to flip-flop on the economy, on the emissions trading tax he had previously supported; on anything in which he needed in order to oppose Labor.

His captain’s calls were the signature notes of his capacity for monumental ineptitude. Last Friday’s leak to the Daily Telegraph purporting to be his cabinet reshuffle plans was taken as a leak from his office, whatever its true origin, such is the well-established pattern. It creates a swell of disaffection and discontent to boost Turnbull’s recruiting drive.

His grandiose delusions, his mendacity, his broken promises helped make Abbott the most unpopular and least successful prime minister in Australian history and contributed inevitably to his spill. And more than a touch of madness. Turnbull tells anyone who will listen that the increasingly erratic PM is burning the house down.

A liability to his party and an ever-increasing threat to the seats of growing numbers of his colleagues, Abbott is deposed by his nemesis, the man he, himself, did down five years earlier. It is karma with more than a whiff of betrayal. Of course when pressed, Scott Morrison has his hands clean despite his Holiness Ray Hadley wanting him to swear his innocence on a bible. Similarly Julie Bishop has played no part at all, she assures us in her PM’s downfall.

Scott Morrison does not contend the deputy leadership spill despite the PM summonsing him the day before, promising him the posts of Treasurer and party deputy leader, provided he stand for deputy. Morrison cops it from Ray Hadley but denies he colluded with Turnbull. This is the most amazing ‘hands-free’ leadership coup in history it would appear but give it a week and the dirt will start to come out.

Already there are leaks about Turnbull’s claim to favour women. He has the worst record as Communications Minister for employing female staff members. Of course, the figures are misleading as he happily explains to Labor questions, when they can get their questions right.

Having got its worst actor ever off stage, the Liberal party has no choice but to fall back on another old ham, Malcolm Bligh Turnbull, who seizes his chance to finally knife his rival. He promises less shouting in parliament. He always prepared to argue clearly and equably why he is always right.

Turnbull, a long-winded narcissistic know-all proceeds at length to talk himself and his party up and to put everyone else down through a week of parliament in which Labor appears under some sort of hypnagogic spell. In the meantime several Abbott Cabinet Ministers, Andrews, Hockey, Dutton keep nicking out to appear on TV auditioning for their former jobs. A disgusted Liberal MP calls their performances ‘craven.’

It is not an edifying performance from either side. Some see Turnbull as a Rumpole reprising his best barratry. Most are distressed to hear him embrace the right. Labor accuses him of being an Abbott with elocution; an Abbott in a better suit. Burke notes that the new PM has locked himself in to every one of the Abbott government policies.

Turnbull hectors, lectures and patronises even Tanya Plibersek on Foreign Aid who responds with a request for a little less mansplaining. Leave the bloviating to Brandis, she could have added –  for everybody’s sake. There is a palpable sense, however, of the new PM having got what he wants, just going through the motions of being engaged by parliamentary debate.

The key task at hand for Turnbull is to choose a cabinet that will tide him over until an early election delivers him another three years of power at least. Malcolm Blowhard Turnbull may be fond of the sound of his own voice but he is even fonder of getting his own way. Coalition godfather, Rupert Murdoch freely dispenses his well-intentioned advice.

‘Sad to see such a decent man as Abbott toppled,’ Murdoch writes in a tweet. ‘Now Turnbull needs a November election before Labor sacks Shorten.’

Not so fast, Rupert. Malcolm has to pick the right team. He’s had plenty of prompting, thank you. The Liberal parliamentary party is not shy of self-promoters. Happily, such types are also like their former leader undone by their own hubris. Look at Morrison, for example.

Scott Morrison, it is widely held will be Treasurer because Joe was hopeless. Morrison, the people smuggler, the arrogant bully of Gillian Triggs is held up in contrast as a ‘good performer.’ Reza Berati’s family won’t be writing any character references. Barati was bashed to death in February by a Manus Island guard and an accomplice. Those sexually abused in the Nauru camp won’t be writing any testimonials for either Morrison or Dutton who recently swept aside the findings of the Senate Committee as being politically motivated.

‘Good performer’ is a self-referential, self-serving term, as if it matters not a jot what it is that is being performed, be it cruelty, secrecy and utter contempt for accountability and due process. No-one who presided over the indefinite detention of men, women and children in conditions of punitive neglect in the Abbott government’s mission to stop the boats is fit to be in government let alone hold a ministry.

Malcolm Turnbull will not be guided by such concerns, however. He will be interested only in balancing power within his cabinet, of keeping a political lid on things until he can get re-elected. But don’t think that after this the ‘true Malcolm’ will return to his small l Liberal, progressive ways. Politics is all about power and Turnbull has to appease and control a right wing party where power is wielded by throwbacks to the Howard era whose attitudes and values are woefully out of step with modern society.

Turnbull may be our new Prime Minister but he inherits a parliamentary party of refugees from reality; he is bound to their hide-bound conservatism for his very existence, let alone his continued survival.

2 thoughts on “Another week in politics, another narcissistic opportunist, the false promise of Malcolm Turnbull.”