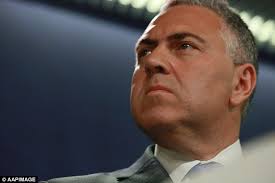 Remember that young Joe Hockey, from Sunrise TV?  Full of jovial bonhomie and matey ocker banter, the man exuded likeability. A likely lad, he was rated highly by TV couch potatoes across the land. All for grinning and acting the fool.

Back then Joseph Benedict Hockey was a rising star, a young Turk, although of Palestinian Arabic extraction, a future PM and harbinger of a matey, multicultural, new era of brotherly tolerance; effortless accomplishment and noblesse oblige.

Nine years ago, now, at least, Hockey’s political fairy tale had us in its powerful spell. The rock of the world is fastened securely to a fairy’s wing, says Francis Scott Fitzgerald about the unreality of reality in The Great Gatsby.

Affable Jesuit educated north shore Sydney migrant boy, turns politician, renouncing a world he’s barely had time to taste let along experience. Or suffer much to inherit. Runs for SRC president at Sydney Uni in 1987 on a free beer ticket.

No yobbo, though, not our Joe. Neat. Nicely turned out. Pin stripes, tie and clean shaven, even in the ungodly hours of the sunrise time slot. Mums love him. Best of all he seems solid, dependable, bankable.

Not everything goes his way. Those studio lights are hot. And it’s hard work being funny, let alone consistently nice. Yet nothing ever seems to worry Joe. Nothing dents his relentless cheerfulness. Upbeat. Glass half full kind of fella. Happy as a clam at high tide. Always cracking silly. Full of beans and bus-tickets.

Everyone knew Joe then. Or reckoned they did. He was a part of their lounge rooms; grinning, guffawing, hanging shit on Rudd; talking shit, letting everyone know underneath the expensive suit he was a regular, normal Joe even if he did come from a rich family, his missus was a merchant banker and everything.

Joe wanted us to know it was OK to like him. So too did his Skippy bookend, K Rudd. Kevin 07 and Joe were always stirring each other, joshing, mugging for the camera. Joe won best guffaw. Rudd won cutest comebacks.

They should have kept it going. The Kev and Joe show could have come next, a Seinfeld with politics, a show about nothing that made you feel OK about knowing nothing, doing nothing, that there was nothing to worry about a show which was just good fun. Make you laugh. It was OK to suck at politics. But Rudd pulled the plug once he got into office.

Well, guess what. Turns out Joe’s still around. Looks the part, too but he’s a lot less jovial. Still a big joker, though.  Good that he’s been able to keep that up. The other day he reckoned he was the federal treasurer. What a crack-up.

Monday, he told a ledger of accountants at the ACCI Business Leaders’ Summit that we ought to cut income tax rates to arrest bracket creep and to ‘incentivise workers.’ Reduce the ‘burden’ of their taxes.  Especially for his mates, the 300,000, the top three per cent who will creep into the second top tax bracket. Or politicians nudging into the top.

‘He got us all here to tell us that we need lower tax rates’ fumed a bean counter head of the CPA of Australia, a mob which blows hard about rich people needing to pay less tax but for workers’ rates to be slashed because everybody knows that business is crippled because wages are too high. Penalty rates are prohibitive. Cafes and restaurants are their favourite examples. It’s bullshit.

Latte servers and mocha sellers are not struggling. ABS figures show a hospitality sector in rude good health. As for their boss saying ‘hell I just won’t go in to work today because I am paying a few cents in the dollar more,’ that is an even bigger stretch of reality.

But how would Joe know? His advice to anyone who wants to buy an overpriced home courtesy of the housing bubble that he and his banker mates helped create is to get a better paid job. Get wealthy parents. Marry a merchant banker. It worked for him.

Hockey sees our taxes as ‘a burden’ we should try to get out of instead of our social responsibility, a way of paying our way; helping support others. Funny man. Look where it’s got the Americans. His latest cuts will cost 25 billion over four years. To get that he will cut government spending on hospitals, schools, social service.

But he won’t stop there. He’s all for upping the country’s GST rate. Needs to be 15% and include education, health and fresh food. GST is a regressive tax, hitting low income families hardest.

Hockey’s still a neocon comedian. Wealth, he insists despite all the evidence, trickles down from the rich; workers just can’t be stuffed working hard because their wages have gone up only to take them into a higher ‘tax bracket.’  Another couple of crack ups.

Wealth does not ‘trickle down, Joe; top income earners are surprisingly adept at hanging on to extra income. They are the nation’s best savers for example. Wages are not rising, in the real world even if politicians did give themselves a 31% pay rise in March 2012. OK they did get another 3% on top of that three months later. The base for a backbencher became $190,550. only 2.7% of the workforce gets over $180,000.

You always were protected from the real world, Joe. Privileged. It’s your shtick. As Treasurer to the wealthy, you are a gem. Keep looking after the elite. Great to hear you are keeping the free beer flowing.