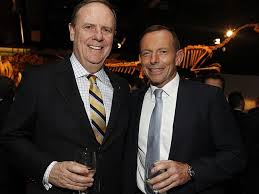 “It is an absolute principle of democracy that governments should not and must not say one thing before an election and do the opposite afterwards.” Tony Abbott 2011

‘A morbid joke,’ Peter Costello’s considered view of the Coalition’s failure to match its ‘lower, fairer, more effective taxes’ promise, is a term with wider application. It fits its entire period of office. Despite Tony Abbott’s pledge to mend his ways in February, to be more consultative, his government continues to make a fool of itself and the mug punters who elected it. Witness how Peter Dutton’s illegal secret mission to repatriate Vietnamese asylum-seekers has become our latest national fiasco now that word has got out, confirming to the world that Australia’s immigration and border protection policy to be run by cowboys and morbid jokesters.

Breaking its word, retracting and redacting willy-nilly, it flip-flop-flouts even Abbott’s own ‘absolute principle of democracy,’ trashing every promise which helped it gain office.  Opinion polls show an increasingly alienated electorate as the PM and his government seem daily defeated by the challenges of day to day government, stuffing up even a simple COAG meeting, let alone winning any hearts abroad, making its pre-election pretensions to integrity and unbroken promises a morbid joke indeed.

Rattled by his near-spill early in February, Great Helmsman Abbott, spirits buoyed to find himself still in the boat, any boat, let himself get carried away with profuse displays of contrition. Contrition comes readily, too readily, to the politician and failed trainee Catholic priest who is on record for preferring to act first and apologise afterward. Weak and irresolute at heart, stubborn and vindictive by nature, as in his withholding 3 billion of infrastructure funding from Victorian Premier Daniel Andrews who has sinned by opting to develop public transport, he is a goat in sheep’s clothing.

The new, reformed, consultative, Abbott is still running off at the mouth. It gets him into trouble. His remark to Angela Merkel that ‘fear and greed’ were driving our China Policy, a pithy off the cuff quip in another context has come back to bite him on the bum. Similarly, his rash promise of good government escaped his lips before his brain was fully engaged, but it has set him an impossible target.

‘Good government’ may have been a parting ventriloquist’s trick by chief of staff Peta Credlin, or a captain’s call. Whatever the explanation, it amounts to a desperate and costly move to buy time. Ultimately, moreover, the gesture only raises some further tricky questions about his leadership. Would he know good government if he fell over it?  Would his track record encourage anything but disbelief?  What did it mean for all that had gone before?

Abbott’s promised ‘good government’ is still nowhere to be seen. Dog-whistling racists in Reclaim Australia, fear-mongering over terrorist threats, ice epidemics and debt, repatriating Iranians to face almost certain persecution or secretly permitting corporations to explore our marine national parks for oil, his government continues to alienate the electorate with its poor decisions, its dismal performance.  Good Captain Abbott may have narrowly avoided capsize in February but his government has plumbed new depths rather than change course. Chaos, chicanery and ineptitude proceed apace on his watch.

Peter Dutton today praises new laws before the Senate which would enable asylum seekers in detention centres to be bashed to death. Costello mocks Hockey openly on the treasurer’s failure to achieve its slogan of fairer, lower, more effective taxes. Our ‘national conversation’ on taxes is pre-empted by a PM appearing on national TV to overrule any calls for increased taxes. As leader of a government that is ‘not ruling anything in or anything out’, the ‘good captain’ Abbott appears destined to forever cause more chaos and confusion.

To cap it all, the piece de resistance of its reform, the fruit of its herculean heavy-lifting, is to be ‘a dull budget.’ This is possible, Abbott and others claim, because of the heavy lifting that was done earlier in its wildly successful first budget, ignoring entirely the seventy billion extra in debt its actions have cost us so far.

Perhaps a dull budget is all that may be expected from a dullard government so decisively defeated by the challenges of government that it appears completely out of its depth just past the half-way mark; not waving but drowning. Dullness may be all the Abbott government can manage but dullness will not help it survive.

Business groups have gone ballistic. ‘The last thing we need as a community, and as a business community, is another year of paralysis and doubt about what the Government can do,’ bellows the Australian Industry Group’s Innes Willox, another disappointed by the PM’s apparent lack of budgie in his smugglers.

The times require a bold budget! Business leaders urge, wanting a government to hold their line, repay their support. But audacity is a function of mendacity alone in Team Abbott. It could rain a sky of Kate Carnells to rival Magritte’s Golconda, before any boldness will be seen or as long as Captain Abbott must fight desperately to cling on to the helm.

Let Kevin Andrews pretend that his failure to name the leader of ISIS, our enemy and Anti-Christ, western civilisation’s nemesis is inspired by anything other than a senior moment or the product of a cultivated ignorance and blind obedience according to the dictates of a devotional faith.  Explain it away as ‘operational matters’ all you like, Mr Andrews.  To anyone else it is manifest incompetence.

‘Know thine enemy’ is a first principle in Lao Tzu’s treatise on the art of war but our Minister of Defence prefers a different strategy. Ignorance is bliss. Military intelligence is after all long held to be a contradiction in terms. Let our PM and his ministerial Kevin-in-chief continue to box outside the thinker.

Andrews’ ignorance symbolises our blind terror-alert state in which urgers tell us Armageddon is expected tomorrow at the hands of our vast invisible, unnamed enemies of state who hunch over Facebook, Twitter and other anti-social media in Lakemba and other suburbs near you being groomed by IS recruiters for investment as Jihadi suicide bombers.

When reality seized him by the scruff of the neck, as it has so regularly in his chequered career, it suited the PM to strike a penitent pose. Yet so far,  we witness nothing but more of the same bad practices from a battle-shy team led by the same bad, ‘Good Captain’ Blatherskite, Tony Abbott, the narcissist’s narcissist obsessing endlessly over his own survival, compelled, as ever, to put everything else last. Camouflage survival politics all you want with fear, Mr Abbott, we see what you are up to.

The Abbott government resorts more and more to panic button politics in a futile attempt to bolster its waning authority and legitimacy. We endure determined attempts to put the frighteners on us at every opportunity. Look over there! Look out behind you! Look anywhere but long and hard at us, it begs in a dreary procession of alarmist reports, data retentions and militaristic impulsivity.

Insecurity is contagious, crippling. Faced by a desperate existential crisis, largely of its own making, the Coalition has resorted to a hastily compiled survivalist’s grab-bag of old political tricks including fear-mongering, sabre-rattling, and appeals for the electorate to tell it what to do, please. Its backflips, concessions and its elevation of indecision to polity as seen in Hockey’s mantra: ‘we are not ruling anything in or anything out’ combine to reveal a ‘good government’ which is so bad that it is embarrassing; alarming.

It is also alarming, even to itself, as can be seen in its repeated calls for ideas or ‘conversations’ which mask an indecisive, conflicted government which lacks the will, the skill and the political fibre to do anything beyond struggle to survive. Wedged by its business ‘supporters’, such as the amazingly ubiquitous Kate Carnell, apparently oblivious to falling iron ore export prices and other economic challenges who demand self-interested ‘reforms’ of wages and conditions under the pretext of greater productivity and an increasingly alienated nation, the government is caught between a pile of rapidly depreciating rocks and a hard place

Despite the obsequious Murdoch press and its biased Newspoll, there has been no dead cat bounce in the opinion polls. The only modest rally came when those polled believed a leadership shuffle was on the cards. Clearly, the key to halting the Abbott government’s spectacular popular decline is to get rid of Abbott. Yet it has no-one in the party with the bottle or the ticker or the foolhardiness to challenge the leader. Who would, or could, seize the wheel of the LNP juggernaut?  Overladen with lost wolves in sheep’s clothing it veers alarmingly all over the road in its own demolition derby, before rushing downhill, irrevocably toward oblivion. A dull budget could be the Abbott government’s ultimate morbid joke, should it lead to a double dissolution.