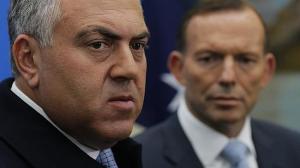 ‘I think the nation is ready for a conversation about our future.’ Joe Hockey, Australia’s hapless treasurer, fingered the ‘conversation’ trope reverently as if it were a worn rosary bead. Hockey exuded paternalistic concern and affable superiority. As ever, he knew what was best for us. It was as if Dad had noticed one of the kids needed a haircut or a clip over the ear for wasting grocery money on sweets. His actions, however, show rather less concern for future generations. By December the Abbott government will have doubled Labor’s debt.

Regrettably the Treasurer could not provide any real rationale for our nation being ready to talk about our futures. The dog ate his homework. He had been hoping to lean heavily on the government’s intergenerational report but its release has been held up by the political chaos rife in the party. Now his case was missing but, typically, that wasn’t holding him back. He was pressing on with the business of good government. He explained this to 3AW’s Neil Mitchell.

“I am doing the heavy lifting for my country,” Hockey said. “I am going to keep going because that’s what people say to me on the streets, ‘keep going, Joe’, and I am keeping going.”

However flatteringly he may choose to portray himself as the virtuous laborer in the vineyard of ‘reform’ for the media, the results paint a different picture of the Treasurer. He’s a gunner. Last year, for example, Hockey had promised the IGR (Intergenerational Report) by the end of December 2014. Its postponement means he has broken the Charter of Budget Honesty Act. The tax reform white paper is also overdue.  These will form the basis for the “deeper conversation with the Australian people” that ‘gunner’ Hockey proposes to have with us.

Before bowling us over with the logic of IGR’s statistical trends, the Treasurer and his government would do well to ensure ‘the fundamentals are in place’ for a genuine dialogue. There is a lot of ground to make up. A first step would be for the government to demonstrate that it is genuinely interested in dialogue with the electorate. So far it has been simply driven by neo-liberal ‘dry’ economic ideology, an ideology that is imposed with the help of scare tactics and fear campaigns. Ideology not dialogue is what keeps Hockey and his government going.

Delaying the release of the report will also effectively curtail discussion as business interest and lobby groups have pointed out. Other commentators have suggested that the delay is in part due to the need to rewrite the tax paper to meet Abbott’s change of heart over any extension of the GST. Regardless of the cause, the result is to guillotine debate. Good faith has not been kept.

Conversations are founded on honesty, trust and mutual respect, Mr Hockey. Your surplus promise was not a good start. You promised: ‘we will achieve a surplus in our first year in office and we will achieve a surplus for every year of our first term. ’Broken election promises, meltdowns at the top, your government’s flip-flop policy changes mean that you have some huge repairs to make to your credibility before you can begin to engage in real dialogue.

Real dialogue is possible only when each party knows where the other stands. Right now it seems that you and your PM are not on the same page. Tony Abbott’s all for easing back from the ‘tough measures’ as you call them. But you are on the other track. You are not budging from austerity, despite its dismal record overseas. So which is the correct government policy?  Is it ideologically dry or a little bit wet as a sop to the voters? A man cannot dance at two weddings with one behind, Joseph. If you want a national conversation you need to tell us where your party stands. And you need to tell the truth.

Honesty went out the window with your next act of duplicity, your debt and deficit drama. You wanted to scare us into accepting your ideologically driven budget agenda, an agenda which would have resulted in higher unemployment and a slowdown in the economy. This flea-bitten, threadbare pantomime warhorse needs retiring, Mr Hockey. It’s an embarrassing fake. Debt is not an issue in itself. What counts is the ratio of debt to GDP. On that we are in rude good health.

Last week you claimed that Australia will owe a trillion dollars by 2037, a figure based on our ‘current debt trajectory.’ Top marks for doing your best to crank up a scary big number, but it’s not this figure that matters. It never has. What matters is the ratio of debt to GDP.

Government debt is now about 20 per cent of GDP, a ratio it has maintained historically. Since GDP grows nominally at around 5 per cent a year, the debt to GDP ratio stays unchanged if debt also grows by 5 per cent. In brief, the budget is near enough to being in balance that it is not worth worrying about. Yet you happily terrify the population with the spectre of ruin. Is that good government? Responsible economic management?

Years ago, Joe Hockey enjoyed real celebrity credibility with a regular spot on the Sunrise Show. Hockey played the genial buffoon to his frenemy Kevin the nerd in a show full of blokey, jokey bonhomie and other televisual small change. There was a lot of stirring and kidding along between the chummy pair with the odd low calorie political point thrown in. For a moment they both looked like fixtures but John Howard wasn’t happy at Joe’s fraternising with the enemy and in the end Kevin got caught up in an issue of honesty and integrity.

The sun set on the ‘Joe and Kevin Sunrise show’ nearly eight years ago when Rudd’s false dawn created a stir. Rudd rang the producer to pull the pin. The public was kicking up a fuss over his involvement in a plan by the show to stage a false dawn service broadcast from Vietnam on Anzac Day. Rudd saw it as threatening his credibility and honesty.

It was to be all downhill from Rudd’s false dawn. After some brilliant work from his team protecting us from the GFC, micro-managing control freak Rudd went on to stuff up government, set back the Labor cause and ‘fair shake of the sauce bottle,’ mangle the vernacular.

Hockey began ranting about the ugliness of wind farms.  Once in power he was banging the drum for big ticket ‘reforms’ which would penalise the poor but help wealthy interest groups towards amassing even greater wealth.

Better for the nation had they both stayed on Sunrise. Kevin grinned his heart out, dumbed down his act and pulled his punches. Joe carved out a role as the nation’s boofhead goodwill ambassador. He was going places then. He was a shoo-in for a big part in a children’s show had he put the hours in. Whatever made him put his hand up for a job he could never do.  A job he for which he lacks both qualifications and experience? As federal treasurer he makes a great former TV bit-player. He could have had a real career.

Hockey could have got a gig as host on the Price is Right or some other minor celebrity game or virtual reality show which left the contestants to do the maths and count the money. He was a natural for the role of unassuming ordinary bloke with less to him than met the eye.

Now his job has bested him; now he has revealed his allegiance with the big end of town; now he has shown he is an ideologue whose policies favour the elite, Hockey’s popular appeal has vanished. His party will dump him along with his leader when Abbott’s next major stuff-up forces it to finally come to its senses and turn to politicians who have more than cosmetic appeal.

Hockey can call for a conversation all he likes but he has forfeited his part in any real national dialogue with his duplicity, his scaremongering and his ideologically driven campaign for austerity measures that preserve the privilege of an elite at the expense of the rest of society.

Above all, conversations require trust and mutual respect. Honesty is vital. This government and its treasurer have destroyed the very foundations on which to build any real dialogue with the people. It is no use promising to patch things up or to restart let alone invite us to a chat about our future, Joe, when your government’s fundamental underpinnings are rotten at the core.