Berserkers (or berserks) were Norse warriors who are primarily reported in the Old Norse literature to have fought in a nearly uncontrollable, trance-like fury, a characteristic which later gave rise to the English word berserk.
‎Berserker (disambiguation) – ‎Harii – ‎Trance – ‎Old Norse literature

The fury of the berserkers would start with chills and teeth chattering and give way to a purpling of the face, as they literally became ‘hot-headed’, and culminating in a great, uncontrollable rage accompanied by grunts and howls. They would bite into their shields and gnaw at their skin before launching into battle, indiscriminately injuring, maiming and killing anything in their path. Dating back as far as the ninth century, the berserker Norse Warriors were said to be able to do things that normal humans could not. According to ancient legend, the berserkers were indestructible, and no weapon could break them from their trance. They were described as being immune to fire and to the strike of a sword, continuing on their rampage despite injury. – http://www.ancient-origins.net/myths-legends/viking-berserkers-fierce-warriors-or-drug-fuelled-madmen-001472#sthash.OjUlp4Ue.dpuf 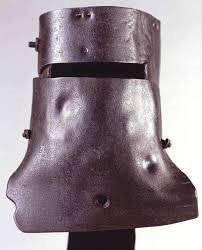 In a rare moment of capital Canberra madness this week, Australian Prime Minister Tony Berserker Abbott once again unleashed a perfect desert storm of unbridled ridicule and derision when he publicly exposed his position by professing to his finding the burqa ‘ personally confronting’. Abbott may as well have tipped his kitchen slop bucket, or his bedside commode over his own head or defended kick-back king Arthur Sinodinis before an ICAC hearing such was the ensuing great stench, a stench which threatened to put the PM even further on the nose, even, as he himself contended yesterday threatening to create such a distraction that it would upset important business such as his spin on Australia’s illegal invasion of Iraq.
What the PM really wanted to share with the nation was that the very good news, the very good news, his very, very good news, that when the Iraqi-US puppet government came back to work from its holiday (if it ever came back) and if it by then still had anything left of Iraq to administer, and further, should it ever have a defence minister, to even at this late stage, have a foolhardy person sign his own death warrant or strap himself into the virtual suicide bomber’s belt of the portfolio of Iraqi defence minister, why, at that point in time, the minister would sign the utterly worthless piece of paper which gives Australia permission to invade the country, kill other Iraqis and generally look after the interests of multinational oil producers and the strategic requirements and expectations of the United States. Up until now, the complete absence of any candidate was merely a testament to the ways Iraqis have so fully embraced the democratic process. This includes pocketing billions of dollars transferred from would-be supporters donated to build up their defence stocks of helicopters and armaments. Above all it includes engaging in the ruthlessly systematic, joyous wholescale persecution of infidels adhering to minority religions such as Sunnis which at last reckoning made up a fair swag of their nation’s population.
The push of thinly veiled scallywags, disguised as journalists, in the Canberra press gallery countered that Abbott should pull his head in, arguing reasonably that most Australians found the sight of a PM out in public in red underpants or speedos truly confronting. Some ventured that Bronwyn’s bouffant beehive hairdo was not only a cruelly confronting and tasteless parody of iconic children’s role-model, Marg Simpson, but that because of its inherent capacity for concealment was a security risk. Others, including the worthy but truly sidelined voice of mature reason, common sense and justice Christine Milne faced off against Abbott, making appeals to tolerance and acceptance even despite, or perhaps because of, their true feelings that a woman in a burqa is a symbol of oppression unless she is an Afghan cameleer in disguise fleeing exploitation in historic outback Australia.
On-the-record-Burqa opponent, Peta Credlin unveiled the complexion of her thinking eagerly compromising her boss with either an ill-considered piece of tactical advice or a shrewd dog whistle to those Coalition rednecks who wanted to put their heads up above the parapet to oppose the burqa to do so for security reasons. All this did, predictably, perhaps was set the hares after the Afghan hounds.
As if his unguarded comment was not enough of an ‘own goal’, Abbott was then ambushed by the right wing of his party which boasts such stalwarts as Cory Bernardi, Bill Heffernan, Bronwyn Bishop and sundry other rednecks, racists, chauvinists, boors, philistines, undiagnosed dementia patients and rabid haters of the ABC, tolerance, science and reason. The events proved especially embarrassing to Abbott who showed once again that he was out of touch both with contemporary mores and out of touch with the rabid beast that is his own party. Many took his gaffe and subsequent fall out as yet more evidence that he could not control his own rump, although one backbencher did pull his head in when Peta Credlin threatened to smite his neck in a thinly veiled allusion to the Koran and its sanction of decapitation as the just desert of all infidels, a fact which up until now the PMC and its spin unit have been keen to publicly deny.
Whilst some expert Tony-watchers claim that his moves were just the latest in a series of craftily veiled dog whistles, many others conclude that he spoke the truth. As Annabel Crabb has so capably put it, the truth parrot on his shoulder spoke out, as it has to his cost so many times in the past, to put the kybosh on Abbott’s thin and flaking veneer of moderation and his confected illusion of control.