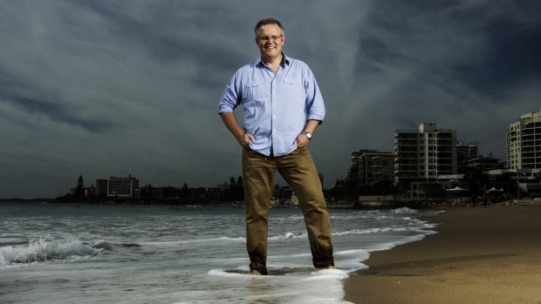 Scott Morrison bobs up on Wednesday’s ABC 7:30 Report for his debut as treasurer, his third role in a Federal Government only two years old. His performance is a shocker. Many viewers switch off or change channels so deeply disturbed are they by even a chance sighting of the member for Cook. Morrison’s 5% rating in the polls as preferred PM suggests a deep public aversion yet his poor public opinion ratings has not put a dint in his ambition.

Not one bit. It’s something Morrison can’t ignore, however, should he genuinely aspire to be a successful Treasurer. It helps if people approve of you. Trust you. Believe you. Respect you. The former minister for immigration and border protection has forfeited all of these, despite his reincarnation as Social Services minister, a role he describes as the ‘tough cop on the welfare beat,’ albeit a softer role than his act as Border Force Supremo.

The Monster of Manus Island lurks not far below the surface of this newly reinvented Morrison. He bull-dozes and blusters his way around a set of fair and reasonable questions designed to permit him to give an account of himself. Nothing new worthy of note emerges but the rest of his performance is scary; a flashback to the bad old days of Abbott. At the end we are left thinking that appointing Morrison is Turnbull’s biggest mistake so far. Unless he means him to fail. The pair have a history of bad blood. Morrison was one of a few who defected from the Turnbull camp to support Tony Abbott, an arrangement sponsored by the NSW Liberal Right.

Promoting the boat-stopper to Treasurer may be Turnbull’s crafty way of controlling his ambitious young rival. Give Morrison a job he can’t do. Cut him down to size. Keep him busy. Then, when he fails, send him packing -along with his neocon austerity nonsense. Then a change of course to more enlightened economic policy.

Of course the reverse may be true. Morrison could be running his own Abbott-era economic austerity agenda to win enough points from the Howard throwbacks and others who form the sclerotic hard right wing Liberal rump to wedge Turnbull in the party room. Thirty Liberals voted for Kevin Andrews, it must be remembered, in the deputy leadership spill.

But that’s idle speculation. What we see on Wednesday is alarming enough without second-guesswork. Morrison spews a fog of words, a noxious, billowing miasma of aggression, evasion and untruth. He bullies. He hectors. He bluffs. It rapidly becomes impossible to recognise the creature advancing under his own cloud of mustard gas.

Is it a venomous toad? Sales certainly isn’t going to kiss him to see if he turns into a prince. In fact after a failure to pin him down on what he knows and is never going to tell, she opens the formal part of the interview by telling him he is wrong to claim the government has an expenditure problem. Sales chides Morrison that we have a revenue problem as well.

Two things became immediately clear. Firstly, Morrison is economically illiterate, despite having taken economics in his degree. He shows little grasp of his new job. Second, what he does know, he won’t be telling. How he helped kick Abbott downstairs, for example, is a story he will never tell. To cap it all Morrison has a vacuous new slogan: ‘work, save and invest,’ courtesy of some think tank somewhere in the dismal Liberal Kiss Army of spin.

Sales gives the new Treasurer a platform to explain himself and his policies to the nation. In particular, he could reveal why cutting government expenditure is now his sole priority despite expert advice that cuts alone are never the answer. Cuts, moreover, would hasten the onset of recession. Morrison fails.

He also gets an opportunity to defend himself against recent Abbott’s recent criticism. Morrison evades the question.

Sales presses Morrison about the part he had played in the Liberal leadership coup. She offers him a chance to respond to Tony Abbott’s surfside allegation that he had ‘badly misled people’ with his claim after the coup that he had warned the PM that the Liberal Party room was about to depose its leader. Even Abbott haters believe the former PM’s claim.

Morrison is evasive, fobbing us off with the lie that this has all been cleared up last week on his friend Ray Hadley’s show. Ray implied he was lying, in fact, even requesting that he put his hand on a Bible which could not be found. Sales counters that Abbott had made his allegation this week, after the Hadley show. Morrison stonewalls, a favourite tactic. Stonewall Morrison has dealt with this question, he alleges and he refuses to discuss it further.

‘I don’t think there’s any profit in going over them again here tonight or any other night.’

In a past life this would have been an ‘on water matter’ or ‘an operational matter.’ Now it can be seen even more clearly for what it is –  sheer, bloody-minded intransigence. Morrison, it seems,  is in no hurry to take up his new PM’s call for a new consultative ministry. Last week Prince Mal promised a new style of leadership that ‘respects people’s intelligence, that explains complex issues and then sets out a course of action.’

This is not what we see from our new back-to-the-future Treasurer. He is in full Abbott minister mode as he evades, denies, dictates terms. Prevaricates. Lies. A persistent Sales eventually get an answer – of sorts. Morrison failed to warn his boss, he says, lamely because it wasn’t his job.

‘I was never the opposition whip and if the prime minister at the time wanted to discuss those matters with me that had been raised, well that was a matter for him.’

It’s nonsense. Raising matters would be a bit difficult if the PM had no idea what matters were coming to a head. Clearly, Morrison has just implicated himself in the coup. Is this the best defence he can come up with? Does he not realise that trust plays a key role in being a successful treasurer? Or does he simply not care?

Having admitted that he did not warn Abbott as he should establishes Morrison’s complicity. He begins to tank early in the interview. His admission costs him credibility. The answers that he is prepared to give Sales, the tedious explanations that are long on rhetoric, short on details fail to explain how he intends to do his job as Treasurer.

Everything he says is dimmed in Morrison-speak, a fog of dissimulation, secret power plays and overweening ambition. Is he axing government spending because this will cost Malcolm Turnbull his authority in the party room? The theory is gaining favour, he is so determined to stick to his austerity course.  Bugger the experts.

For the rest of the interview, viewers are treated to a performance which confirms how and why the Abbott government managed to alienate the people of Australia so quickly; how it clung to neocon ideology at the expense of any reasoned dialogue on social or economic policy; how ideology displaced any mandate, any responsible contract with the Australian people.

Out goes any hope of mutual respect or policy proceeding from a sense of justice and fairness. It was if someone has flicked a switch and we are back in the badlands of Nope, Nope, Nope.

Leigh Sales puts a fair case. Morrison’s government has failed to improve the economy. Things have got worse since Labor was in power. She gives a few reasons. Unemployment is up, GDP is falling while debt and deficit are climbing. Morrison is dismissive. He sweeps away her list of facts, dismissing her evidence as merely Sales’ opinion. He is not remotely interested in any case she may bring; he is on the show to broadcast his own preposterous spin. An arrogant self-righteous superiority is his major contribution to the conversation.

We are plunged back into deepest, darkest Abbott-land, a land of evasion and intractable confrontation in which Ministers do what the IPA or big business tells them. Morrison, the bull-master ignores experts such as former Head of Treasury Ken Henry.  The new treasurer discards the best economic advice available to pursue the same narrow, ideological agenda which has cost his party one Prime Minister already. His mantra is about cuts.

Further cuts to government expenditure must be made- cuts which will punish the poor and needy. GST may rise to increase revenue so that upper and middle income earners may be wooed with income tax cuts as a sweetener at the heart of next election campaign.  The Abbott crusade against the underprivileged continues unabated, despite the loss of the man at the helm. The Liberal party’s addiction to neocon economic theory is as strong as it ever was. The party’s wealthy sponsors in industry commerce and finance are eager to keep it that way.

4 thoughts on “Scott Morrison’s debut as treasurer shows him all at sea on the economy.”