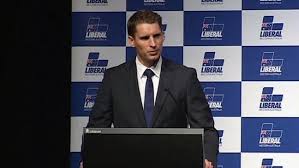 All eyes turn to the diverse Federal electorate of Canning where the death of sitting member Don Randall has caused a by election whose result could determine who leads the nation. Tony Abbott’s career rides on the result, according to a variety of sources in Canberra. Captain Andrew Hastie has been his captain’s pick to stop the rot, a man’s man to send on a man’s errand.

Former SAS Captain Andrew Hastie turns out to be a shy, gangly, young string-bean, awkward around people and ill at ease in public. Just the fella to parachute into the once safe Liberal seat formerly held by the late Don Randall whose local popularity Hastie cannot hope to match. We are treated to images of him at a local shopping centre in the infotainment that passes for TV news.

Hastie mumbles and fumbles. Looks down a lot. The tall young sandgroper is camera shy. Just as well he’s brought his Mum along. Mums come in handy if you ever have to explain yourself. As you do when you are still under investigation for serious misconduct on the battlefield. It doesn’t help that you are pretending otherwise.

Only it’s not his Mum at his side, it’s Julie Bishop. The diminutive Foreign Minister and deputy leader of her ultra-right party, takes the fledgling Liberal candidate firmly in hand. She flashes him around like a new engagement ring.

Bishop brags about Hastie being ‘an outstanding candidate’ as he clings to her arm like a new toy boy or even man bag an accessory after the fact of her own political ambition as much as his mentor. Bishop is not ruling out throwing her hat into the ring should Abbott step down as PM.

Hastie is promising. He has to be. There is little in his record which commends him for the job. He hopes his soldiering will fill the gap in his CV, a delusion encouraged by his military fetishising PM.

Widely seen as a ‘litmus test,’ a do or die by-election for the Prime Minister, Canning is just a bit of routine maintenance, a spark plug or oil change, according to Ms Bishop. She laughs off all suggestions of it being Tony Abbott’s last chance. This only confirms our suspicions.

‘The Canning by-election is all about the people of Canning. It’s all about finding a replacement for a very popular member in the late Don Randall,’ she lies.

If this were true, what is she doing there? Why are some of Abbott’s mates, Andrew Nikolic and two other Tasmanian Liberals, each chipping in $2000 for the campaign?

Hastie says he ‘knows what it means to fight for the Australian way of life,’ but he doesn’t explain what on earth he means; what this means in a multicultural society not at risk of invasion. He talks of how his tours of duty have been formative in his candidacy,

In a place where …’power and violence regularly intersect I’ve come to appreciate the unique conditions of liberty that has led to the flourishing of Australian society and our system of government.’

It’s another long stretch, which only draws attention to the truth. Everybody knows the ‘young fella’ was just another Aussie tag-along in another mad American adventure that has ended badly for all except the international heroin trade. A question mark hovers in the minds of some citizens at least as to why exactly any sane young man would volunteer to go there. Three times. Or what anyone would learn that could help them in Canning from the Narco State of Afghanistan where the fruits of war were chiefly a massive rise in opium production.

By 2014, a record 224,000 hectares of opium was under cultivation, double the amount grown before the American war. Afghanistan produces an estimated 6,400 tons of opium, 90 percent of the world’s supply. The drug is twenty five per cent of the nation’s economy and its tentacles stretch into the highest levels of the Afghan government. The opium trade brings in 3 billion per year and is the largest legacy of the war with America. Australia did its little bit for its great and powerful friend, the US and by extension, the drug lords.

Afghanistan, was a thirteen-year military failure; a futile incursion for which Australian leaders eagerly volunteered our young men. One thousand US soldiers were killed. Untold numbers went mad from their suffering.

Although the war was declared over last December, the ceremony in Kabul honouring the mostly-American and British troops who fought and died there had to be held in secret. The war went so badly that even Kabul itself is no longer safe from the Taliban.

His three tours of Afghanistan notwithstanding, it is probably prudent, therefore, not to hail Hastie as the returning conquering hero. It would be wise, moreover, to question what another soldier could possibly add to our testosteronic posturing, our tribal shirt-fronting leader’s style. The Liberals do not need another junkyard dog. Nor do they need another Audie Murphy loose cannon.

Hastie shoots himself in the foot by firing off a line about Labor being weak on supporting our boys in Afghanistan. He rails against renewable energy.

‘I never felt Labor had our backs when I was serving.’

Captain Hastie was in a helicopter when in 2013 a corporal under his command cut off the right hands of three slain Taliban fighters. Hastie’s claim that the investigation is over is not true. It was normal practice, he claims, a line he contradicts by his assertion that he was first to report the incident up the chain of command. If it were routine, he would not immediately inform his superiors.

Bishop’s defence of him is spirited but unhelpful. What happened was OK, by the Army, she effectively says and besides Andrew was in a different part of the battlefield. Please.

Does it matter where the captain was on the field when the atrocity was committed? Are we to believe that such a violation of the Army’s rules of engagement and of the Geneva Convention on war could ever be considered OK? The spin machine is suddenly under pressure to clean up the candidate’s past before he’s even begun campaigning.

A rapidly flaky Hastie is moved on. Nothing to see here. It’s the same out and about. There is an underwhelming reception for Hastie on the streets of Canning.

Bewildered strangers seem a under-awed. Perhaps it’s the instant familiarity Bishop rains upon them. She is like the Chinese war lord who baptised his troops with a hose. Candidate in tow she barges on; brazenly, fearlessly butting in uninvited; intruding into the private lives of the people of Canning and their business in the town.

Hastie is the goods and she is out touting him about. The people of Canning baulk at the hard sell of a less than glossy Liberal candidate whose paint is already badly chipped and fading as details of his past leak out.

Bishop takes charge of her young man, as Mums do, grasping his hand tightly as if taking a grandson to the zoo. Yet this outing is far scarier; more dangerous. Captain Hastie must fill a dead man’s shoes, he must take a crash course in meet n greet. He must learn what fights to pick and how.

Bishop offers the uneasy former SAS man a career-change jumpstart; an intensive immersive professional development experience, an induction into the show business for ugly people that is modern politics.

Julie is ten megatons of tactical cheesecake and power come hither. Andrew puts his head down and mumbles into his boots. The pair are so totally unalike each is diminished by the other’s proximity. And Hastie needs to learn to keep his mouth shut and not lead with the odd cheap shot.

Being gauche is not the kiss of death in today’s modern Liberal Party. Nor is being fast and loose with the truth. It may even confer a modest advantage but Andrew needs to woo the camera as much as the electorate. Sadly he is terminally upstaged by the supercharged Julie Bishop who is channels her own inner Tina Sparkle, so intense is her razzle-dazzle charm offensive. She gushes bonhomie and repartee, the perfect Perth hostess offering Andrew about as if he were the last canapé on the plate at a society do.

Andrew will be a hit with some Liberal voters judging by the guy in the Dick Smith shop who squeals and wets himself on sight of the new candidate for Canning. Loves a man in uniform. Hastie gives out his card. You can call me. Or email me at any time. Sure. We’ll get back to you after the 19th on that, Andrew.

One thought on “Hastie captain’s pick in Canning will lead to Tony Abbott’s downfall.”